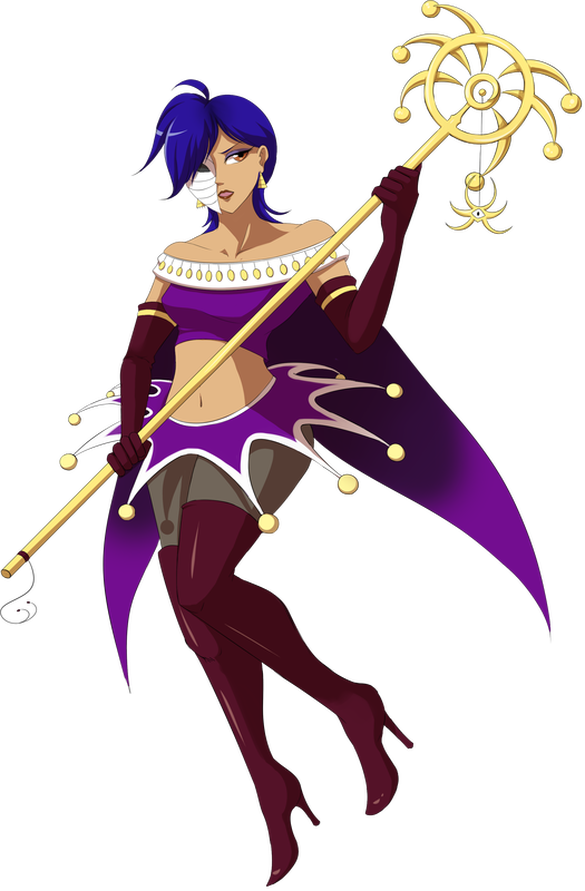 Description:
Jestress is a member of the Dark Siders and mainly serves as the voice of reason in the group. Whenever Vlad does something unreasonable she's usually the first one to call him out on his bullshit. She is also a staff wielding magician. She can fly and use various magic powers from her magical staff. Despite the nickname given to her, she's quite serious minded and has a very short temper. She represents the sin of Wrath in the Dark Siders.
Personality
Physiology and Biology

Jestress is quite a tall, slender woman. She has tan skin with light brown eyes. She also has short dark blue hair with a long bang that falls in front of her mask, which covers half of her face. She wears a thin purple top that cuts off midway on her torso. On the top of her top, she has a row of golden coin jewelry. She has long dark red gloves and boots with dark gray leggings. She also wears a jester skirt and has triangular earrings. Her magical staff is in the shape of a circle with 6 crescent moons around it. A charm hangs from the center of the staff. She also has a split cape that has a black to purple gradient. that she only wears when going out. She prefers not to wear it at home.. or should I say in the Dark Sider's base.

Art of Jestress by Others