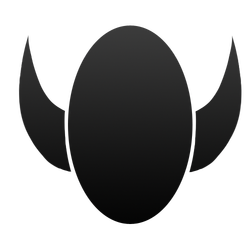 The Dark Siders insignia, which indiscreetly looks like Vlad's head.
The Dark Siders is a small evil legion created and led by Vladmir Von Kurtz. The idea was originally thought up by Keith Offenheimer as a harmless club but Vlad turned it into... something else. In the Gen 3 story, the Dark Siders only consisted of 7 members: Vlad Kurtz, Jestress Singel, Keith Offenheimer, Gorgen, Sky Deathstar, Anita Wallita and Blietrah. It doesn't gain any more members until later on in the future.

Coincidentally each member represents one of the 7 deadly sins: Vlad being Pride, Jestress being Wrath, Keith being Envy, Gorgen being Gluttony, Sky being Lust, Anita being Greed and Blietrah being Sloth.

The Dark Siders was admitted to the Society of Evil Legions in story Arc 7, where it became recognized as an official evil organization. They currently thrive off of selling weapons to Penguian terrorists in exchange for resources.

The Dark Sider's member base mainly consist of social rejects, runaways and wanted people. Most of the time people will be smart enough to not join, since the legion is run by a unreasonable psychopath. But usually if they do, they are either tricked or trapped by Vlad, or find something that benefits them by joining. It isn't until later that people who actually want to rebel against authority chose to join Vlad in his conquest. Vlad usually refers to these people as his "minions" since he only sees them as lowly servants.

The foundation of the Dark Siders was founded on the idea of rebelling against authoritarian rule (like Vlad and Keith escaped from back in Zathurek) and being free to do whatever you want, even if that means attempting to kill everyone you don't like and achieving world domination, which is highly ironic considering that Vladmir controls pretty much everything the Dark Siders does, what his minions are allowed to do, and who he allows to join. Not to mention that most of the missions the Dark Siders go on are only of Vlad's own interest, for he almost never takes the needs of his subordinates into consideration. Despite Vladmir dictating over the entire group, he has trouble getting his minions to obey his whims, for most of them are more smarter and feisty than he gives them credit for.

The Dark Sider motto is: "Don't let society get in the way of what you want."

The Dark Siders doesn't have as many rules as most evil organizations, but most of them revolve around Vladmirs concerns, prejudices or interests. Most of the people that join however don't follow them.

The Dark Siders does a variety of things, like going on quests to find rare items, destroying things, and taking down people that get in Vlad's way. The majority of the missions the Dark Siders go on have to do with retrieving something of value to improve Vlad's inventions and expanding his legion of evil. They also go on missions to destroy or take over an enemy team. Heres a list of things that the Dark Siders have done:

1. Operation: Blow up the Zathurekian School of Engineering (success)

At the second the "Dark Siders" got its name out there. Vlad started his first "mission", to destroy his engineering school along with everyone in it with his first mecha. It was mainly a success but one student managed to survive.

This took two years of development to do, but vlad did manage to succeed in this mission. He created yet another mecha in secrecy in his chamber and basically history repeated itself.

After Vlad and Keith left the inner city, they tried to find a good spot to build a secret base. Vlad found that Cullovi Town was a good place and tried to take it over with... once.. again.. a rampaging mecha. However, he underestimated the  townsfolk and they drove em out of town. This is also when they started to become well known around Zathurek as wanted criminals and a bounty was placed on them.

After traveling with Keith for a while, Vlad starts to feel insecure and states that they need to find a girl to join their team. He was especially looking for one that had magical powers and could heal. They both come across a traveling circus and trick one of the performers, Jestress, into joining them after Vlad sabotages the ringmaster's business. Vlad was satisfied that he finally got a magical girl on the team, but was severely disappointed to find out that she didn't have healing abilities.

After many unsuccessful attempts to try and recruit people who actually had a brain to reject, Vlad tries to switch gears and tries to find a feeble-minded monster to tame. And what better place to go then Southern North Antinacia!  They traveled overseas and while enduring the harsh desert, the Dark Siders stumbled upon a troll hybrid passed out on the ground. Vlad woke him up, dubbed him 'Gorgen', and automatically recruited him with no questions asked.

6. Build a Secret Base (success)

Right after Gorgen was recruited, Vlad decided that this area would be perfect to build his base, for one one would dare travel to this place. The Dark Siders cleared Crawler Canyon Pass and successfully built the Dark Siders Base. At the same time, a trade deal was formed between the Penguian Empire to help the Dark Siders sustain thier resources and confortable living standards in exchange for weapons.

Vlad had been tracking down an entity in space that was said to have suddenly manifested an unlimited energy source in its core. However, he did not expect that so many other villains were after the source too. After causing a cave in from fighting, the Dark Siders fled but left Keith behind for 3 months with Sky, who was also caught in the aftermath. After they finally decided to rescue him, Vlad was disappointed that he got nothing out of it, but they did get Sky Deathstar on the team!