A humanoid demon is a demon of human or humanoid descent. In general, they are one of the most powerful of humanoid subspecies since they have risen to the level of a demon on the Hierarchy of Being.They first arose when a group of humans were split from the humans in the mortal world during the First Apocalypse and were forced to reside in the Underworld. Since then, they have evolved and become stronger to adapt to its harsh environment. They are also the only human subspecies adapted to survive in the Underworld. They also usually have an innate resentfulness of humans and humanoids that live in the overworld (Pelepia) and often think of themselves as superior to them. This doesn't go for all humanoid demons however. There are 6 known humanoid demon species at the moment and they all share these traits together:

-Humanoid demons are all omnivorous and cannibalistic by nature. They will eat other humanoids or weak members of thier species.
​
-They have equal to higher intelligence compared to humans.

-They cannot reproduce naturally. They must infect a humanoid host to create more of them.

Vessel
A vessel is a human or humanoid that contains a demon within themselves.  Although vessels can be of different species, humans are often chosen due to their adaptability.  Demons that are punished by Archdemons for defilement may receive this punishment of being concealed into a living host. The host, or vessel, is often chosen as a newborn baby. Even though they usually dont show any demonic features in their appearance, they are able to release demons and are able to harness their powers within them. A vessel can harbor up to about 4 demons living inside them, but they often go into major psychotic breakdowns and mental problems due to "voices in their heads" or the demons trying to break out. If a fifth demon gets in their bodies however, the body will reject them and the vessel will explode, releasing the demons.

Harpy
A harpy is a human or humanoid whose main ability is flying. Their wings are usually birdlike (some can have bat-like wings in rare cases) and are attached to thier arms. They also have sharp talons for feet along with sharp teeth. The gender ratio of the harpy population is also highly unequal, for there are about 30 female harpies to 1 male, but since most demons cannot mate, it isn't really an issue for them. They are a close relative of the Incubi and Succubi. 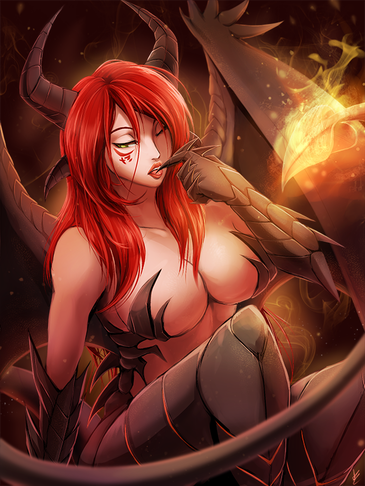 Fire affiliated Succubus
Incubi and Succubi
- One of the very few demon species that can reproduce, but since they cannot reproduce within their species naturally, they seek out other humanoid hosts.
- Regarded as the most powerful of all humanoid demon species and the most dangerous.
- Close relative to the harpy.
- They generally have a normal, conventionally attractive, humanoid appearance for the top part of their body. The lower half however, is covered with black scales. Horn, wings, and tail designs can vary.
- They also have slit pupils, sharp fangs, forked tongues and a marking on the side of their face that represents their family line.
- When seeking mates, they blend in with Overworld society by shapeshifting into normal, non-threatening looking humanoids.
- Females of this species are called succubi (Succubus) and males are called incubi (Incubus).
- A succubus will eat her male victim whole after mating with him to provide nutrients for her baby. She will then lay an egg that will hatch into another incubus/succubus.
- An incubus injects a parasite into a female victim while mating. He will then feign a relationship with her until the parasite has fully grown into an incubus/succubus, which will then erupt out of her.
- Incubi and succubi babies will inherit the abilities of the both the demon parent and the humanoid victim, which can make them quite powerful after many generations.
- Personality wise, this species is very seductive, charming, and manipulative. However, they can be extremely aggressive and violent when the time comes to kill their victims.
- Fertility is highly valued in their culture, so infertility or homosexuality can be banishable offenses.

Monoden
A monoden is a type of humanoid demon whose main power is shapeshifting. They are the tallest of all humanoid demons (reaching about 9 ft) and are characterized with black or dark blue skin, long tails and claws. They also have elongated jaws and various iridescent patterns on their skin. They also lack hair on every inch of their bodies. Their skin has specialized pores that help them camoflage in thier environment as well as changing thier whole form altogether. They commonly possess dark abilites but also use thier specialized claws in combat as well.

Cambion
A cambion is a humanoid/humanoid demon hybrid. Although these occurances are extremely rare, they can happen through special circumstances. Such as genetic experimentation or a mutation in the demonification progress. The cambion will usually express features of both demon and human parents and retain demonic powers.