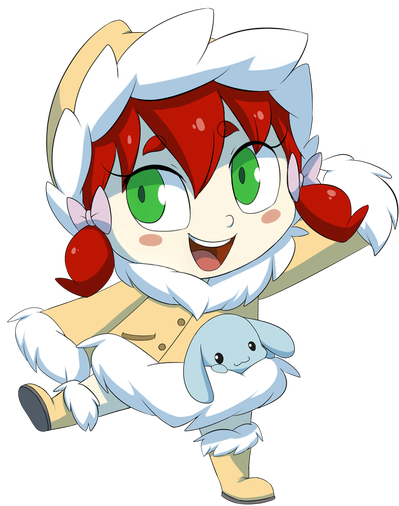 Description:
Anita is a member of the Dark Siders and the owner and controller of Blietrah, being the "monster tamer" of the group. She is also the youngest of the group but has a reputation for having malicious thoughts and having committed evil deeds despite her cute looks. She represents the sin of Greed in the Dark Siders.

She was originally designed by nevaeh-lee on Deviantart but slightly altered later on.
Personality
Physiology and Biology

Being a dwarf, Anita is only half the size of her human counterparts. Her skin is very pale with rosy cheeks and has red hair with pink bows that ties her hair into pigtails. Her light green eyes are very large and is in the common style of the South Antinacian "small pupil and large iris" trait. She wears a yellow eskimo-like winter jacket with white fluffs and dark blueish-gray shorts underneath the dress part. Her arms and hands are rarely shown due to the long sleeves of the jacket covering them, but she is sometimes seen with black gloves underneath. Her boots also match her jacket's design. In the pocket of her jacket, she carries a light blue bunny doll who she calls "Bloo Bloo".

Art of Anita by others