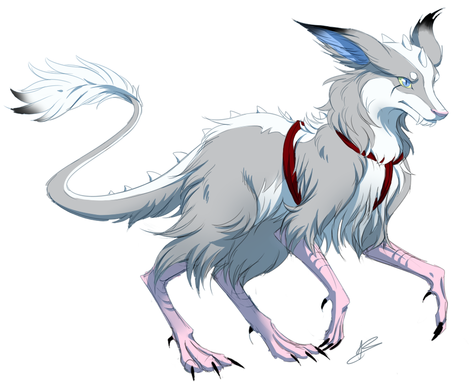 
Saligyatza are creatures of canine/reptilian descent that resemble dogs with dragonoid features. Their closest relative is another canine/reptilian creature called Lupagons. They are domesticated animals often used to pull sleds and other heavy objects.  However, due to their rare numbers, they are now prized as trophy pets rather than workers. They love to run and use their long fur to trap in heat while living in cold climates. Its legs however are hairless and resemble bird legs, but the hairlessness of the legs allow it more freedom to run. These animals come in blueish, grayish, black and white color combinations and in rare cases brown. Its skin is always light pink.

Saligyatza temperament and behavior varies around being stoic, quiet or aggressive.  They usually won't attack unless they are threatened first. When they are, their elongated canines are their first weapon of choice. However, they are not strong fighters and usually flee once they have weakened a threat. They tend to hunt smaller creatures, usually rodents or small mammals. They are considered an endangered species because they are often hunted for their soft, silky and long fur that sell for big bucks.  They also fetch high prices from breeders who sell pets.