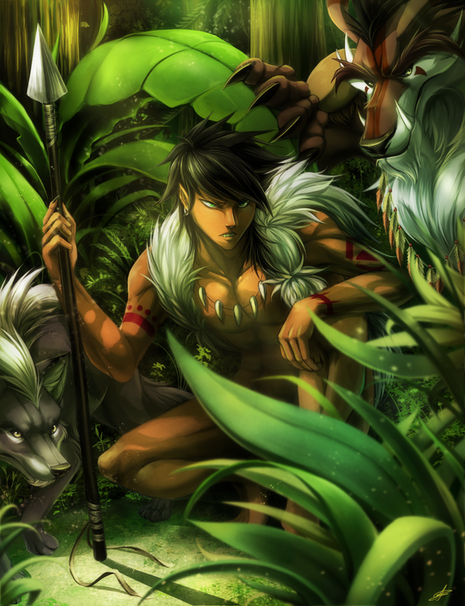 A feral human raised by Lycanthers
A feral human is a human that is infected with the mutagen, Homo Feralis, that makes humans grow characteristics outside of their species and develop an identity disorder where they feel non-human and have a longing to live with the species they have been characterized with. The feral human usually gains a birthmark somewhere on their body that symbolizes the species that they identify with. This mutagen is uncommon, but not rare. Humans that carry this mutagen however usually live near the wilderness and not in high technological areas. The species that the feral human will often identify with usually tend to be tribal creatures, like primates, avians or wild canines. The cause of this mutagen is still unknown however. Normal humans can be carriers of this mutation but are not necessarily feral. However they can give birth to humans that can inherit this. But if a feral human gives birth, the baby may or may not be a feral human. So its like a wiggedy whack mess.

Don't mistake feral humans with human/humanoids adopted by other species or humans that choose to live in the wild on their own!

Feral humans will often exhibit animalistic and non-human behaviors, such as making inhuman noises and walking strangely. Once they are able to move on their own, they will usually leave their biological parents and escape into the wild to live with their "species", which is quite saddening for the parents. Most of the time the species will let the feral human live with them and so the feral human will then form tribes with the species. They will also form tribes with other feral humans that identify with the same species if they can meet any. Their temperament depends on the species they have identified with. Some can range from extremely docile to extremely aggressive. Their approval of normal humans also depends on the species as well, although most of the time species with anti-humanistic ideals can have a hard time accepting feral humans into their society.

A feral human's behavior and beliefs all depend on what raised them and how they were raised. They will usually mimic the same customs as their identified species. For example, if the species is not known to wear garments, neither will the human. However, in colder areas, the human will usually have to resort to wearing something that looks similar to their species so that they fit in, like furs for example. They will also try to develop a similar hunting or fighting style.  Basically they will try their best to make themselves become the same as their identified species as possible. Unfortunately some of these feral humans are often found to have depression issues due to having feelings of "not belonging" and never being able to truly become one with their species. Even though these feral humans are often seen as "uncivilized" by civilized mortals, they are actually just as intelligent as normal humans. Maybe even more so depending on what raises them.